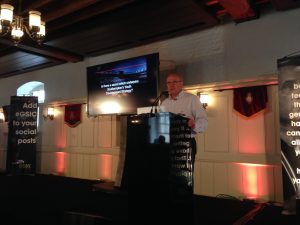 Incredibly powerful speakers from around the world, discussed innovations within the sports industry professionals chosen from 9.000 Sportstec clients accross the globe. Tarkan Batgun spoke about the detailed world of scouting, especially measuring individual scouting performance of the players with a unique points system, accordingly measuring the league benchmarks in order for successfull transfers to be completed.

As a lecturer in Performance Analysis University of Halic Physical Education and Sports Faculty, Tarkan comes with the great experience in his field which resulted in his development of ‘Foundation Level Scouting Certificate Program’ which has over 200 graduates globally. Tarkan has been formally recognised in his home country (Turkey) for his innovative approach including being awarded 2012 Sportsman of the Year in ‘Technology’ and ‘2013’ Scouting Specialist of the Year Award’

Tarkan Batguns’ Presentation Points:
-Thanking Sportstec for choosing him from within 9.000 Sportstec users around the world
-Thanking Bursaspor Scouting Team members, addressing them one by one
-Thanking Bursaspor Club TV Members, addressing them one by one
-Invention of the scouting certification program – tailor made (perhaps the course was designed first time in the world)
-Selection of the scouting team from the fans (perhaps this was first time in the world)
-Unique coding tables were built to measure individual performance on a match to match basis
-The comparison calculation engines were built
-League Position Levels have been measured, match by match, player by player, position by position
-Point system implemented to measure the team itself-Daum and İrfan Buz was instrumental about implementing to the actual game
-Benchmarks for overseas players were defined
-Selection of the best from overseas comparing the team and country data levels
-Club TV channel have been integrated in to the scouting department
-The player information was shared with Youth Coaches & education sessions was shared with coaching staff in order for the implementation of player relationship
-Coaching Association of the region was educated about the scouting system and individual coaches was encouraged sharing player information
-Future is in club to club relationship. 53 clubs were contacted and out going portfolio was investigated
-Worlds known top 100 agents contacted, their portfolio was investigated
-One of the result was finding the striker who became the goal scorer of the Year

Special thanks to Philip Jackson for invitation