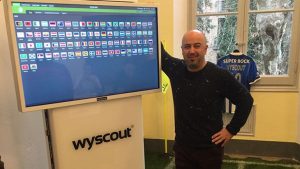 Wyscout Turkey area manager Tarkan Batgun “We are aiming that the presidents of lower league Turkish clubs come to Wyscout Forum in London on the 29 October 16. It is time that these leagues also open their eyes to the world of football through Wyscout events. Match tapes and DVDs have been long last friends to the teams. However, those times have been ended since the 21st centuries best invention ‘Wyscout’ opened arms to the industry in the mid-2000s. The world of football had to adapt and change into the internet world. Not only that, they needed to discover the mathematics of the game through Wyscout reports which have been a revolution itself. While teams are choosing players from Wyscout to transfer, teams also analyze one another through the platforms gadgetry”

It must have been a hard yakka attempt to convince Wyscout by Tarkan Batgun to invest in such scale project, more than 91 teams invading massive data space within Wyscout, however, most of the authorities said that it has been a massive revolution, not only Turkish football but football in Europe. The reason for that is that there are many European origin footballers with the name of Ahmet’s and Mehmets appearing in these lower leagues perhaps with not a word of Turkish. However, there has been the number of interesting appearances from all around Europe, starting live scouting activities all around. Clubs received a sincere amount of calls from scouts coming from Europe for accreditation.

We asked again ‘Sherlock Holmes of Scouting’ in order to find out about this unique project in different aspects:

“HOW CAN YOU DISCOVER A PLAYER WITHOUT A FOOTAGE”

“FROM NOW THE DESTINY OF A TALENTED PLAYER DOES NOT DEPEND ON THE DESTINY TO BE NOTICED. THANKS TO WYSCOUT TO LIGHT UP THE DARKNESS OF THE LOWER LEAGUES”
– “Firstly all the national team scouts will open their eyes to earn new players to the national jersey’s. The players now are all aware that ‘Big Brother’ is watching. Everybody happened to know what is going on in these leagues. It has already reflected on their performance. They are in full capacity to be noticed. Wyscout will be tagging and analyzing the games for a period of one month. Then each player in the league will receive Wyscout player access in order for them to watch their own analyzed match footage. The times now to be able to provide self-feedback. This type of technology does not even exist in the upper leagues. So tell me what more we can do? “

“WHEN I CAME TO TURKEY FROM AUSTRALIA IN 2010, PEOPLE LAUGHED AT ME. NOW I AM LAUGHING”

“I think the worse days were the first days. I remember people laughing from behind, who is this crazy guy with a hat. It wasn’t easy back then. But I realize the power of Wyscout, and they believed in me and embraced me as part of their family. That’s why Wyscout has been the greatest company to work with. It does not feel that I work for an entity, it feels like I am a player and I owned the business, rather I play in a team where each employee of the company works like a football player, love talking football. We speak about the ball. Nothing else.. How good is that. Anyways, I would like to thank to support of Wyscout CEO Matteo Campodonico, Carlo Reggiani, Ilaria Corso, Nicola Borean, Dalila Lorefice (who just had a lovely baby), Giovanni Larosa, Alessandro Cogozzo and all the Wyscout team. I am who I am because of them. Because they believe in me, and support me all the time. Well when you think Turkey had almost no understanding of scouting, now everyone talks about it. That’s because of the family values of Wyscout. Indeed the whole football world needs to thank Wyscout family for their contribution to the worldwide football industry”