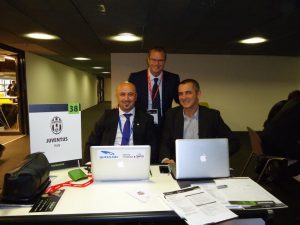 Turkish Football Delegation met with the best football teams at Wyscout forum in Milan on 17-18 May. The delegation had the opportunity to interract with worlds leading clubs such as Barcelona, Manchester City, Juventus, Milan.

Hotel representatives were hosted in the forum with a big “Football Camp Destination – ANTALYA” stand and found fantastic opportunities for their marketing and branding. The camp catalogue prepared by gutto.biz has been distributed to all the guests coming from many different countries. Countries whom usually do not participate in winter camps such as Italy, England, Portugal, Spain and France witnessed fantastic facilities of Antalya Hotels, while the Turkish Super League team representatives and FIFA licensed player agents had the opportunity to meet with clubs which were not easy to meet in the past.

gutto.biz Director and the head of the Turkish Football Delegation K. Tarkan Batgun was the speaker at the Wyscout Forum. Batgun views to the audience:

“Antalya hosts more than 1.000 football clubs, more than 3.000 preparation games. More than 200 official football pitches cover the area. Many clubs come from around globe to camp to this unique place. The clubs in the top leagues of the world are covered by foreign players and therefore home grown youth players never really get the chance to show themselves. This creates a big problem to bring-out and display a good talent. Due to the fact that youth players never really have the opportunity to play for their own team. In a usual sense, they normally go down the below leagues and they disappear. Antalya Hotels are among the best in the world providing the Turkish hospitality. The hotels are very modern and provide exceptional services for the teams. Our idea is to centralise Antalya as the Youth Display Destination by bringing high quality teams to the area for new camps and competitions”