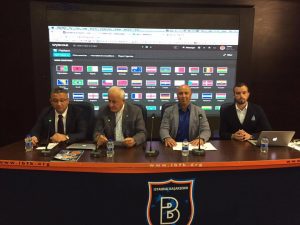 When we talk about scouting, you can never by pass Tarkan Batgun. One must really get to know this genious character:

Over 25 years in Australia possibly injected the fighting spirit in to this guy. His famous hat reminding everyone the ‘Sherlock Holmes’. Italians call him that anyway. Not only the hat, but his advanced technological and footballing background. Before Wyscout, he has been around the world teaching the coaches wonders of SportsCode, famous match analysis software origated from his home land Australia. Graduated from Istanbul University Ecomics faculty specializing in Econometrics, God knows how many statitistical subject he must have passed. After that another course he went to become a computer programmer through Marmara University, then going to Australia, playing in the lower leagues, learning English. Attending one semester to Wollongong University MBA course, but not be able to complete it, chosing his football love over educational carreer. He comes back to Istanbul, becoming a lecturer in famous sports university Halic, 3 times university European league champion.  Turkey and possibly Europe learnt a lot from him, his idea of teaching foundation level scouting course to especially ex footballers and sports university students earnt a lot of new scouts to the industry, his ideas inspiring Turkish Football Federation to open Scouting Courses in 2015. Nowadays he is teaching ‘Live Match Analysis’ within the Match analysis courses while he still appears in Scouting courses by explaining the wonders of Wyscout.

Turkey also witnessed his scouting department management the establishment of Scouting Hospital-first of its kind scouting laboratory in his spell at Bursaspor as the Scouting director. Foreign transfer Fernandao becoming the goal scorer of the year, Ozan Tufan and Enes Unal coming from youth in his time and now becoming national team players. Total of more than 23 Million Euros transfer value Bursaspor earning was a huge record, which has never been experienced by any club so far.

So now he is on the hunting within the lower leagues we are sure. But the revolutionary legacy he lived behind will be remembered…

So should we take to Australia, or Wyscout.. Or his mum and dad to raise a kid like this.. We live that up to your imagination..